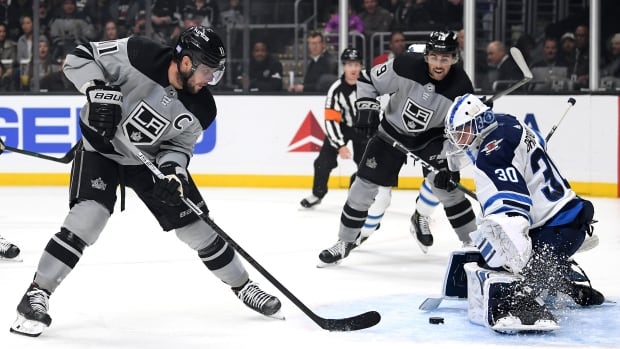 Jack Campbell made 33 saves for the Kings, who have won six of their past eight home games.

Jack Roslovic scored but the Jets were unable to pick up an 11th win in their record-setting November. Winnipeg went 10-3-1, the most wins this month in franchise history. Laurent Brossoit made 32 saves.

Ryan put the Kings up 1-0 at 7:34 of the first period. It was Ryan’s first goal with the Kings after signing with them as a free agent in July, going 65 NHL games between goals since scoring against Minnesota on Feb. 25, 2018 when he was playing for San Jose.

Jack Campbell made 33 saves, including one on Mark Scheifele at the buzzer, as the LA Kings edged the Winnipeg Jets 2-1. 0:34

Dustin Brown got his fourth point in the past four games with an assist.

The Kings took a 2-0 lead at 12:12 on Prokhorkin’s third goal. Prokhorkin, who had been a healthy scratch for the previous two games, was just outside the crease to put in the rebound of a shot by Trevor Lewis.

Kings defenceman Paul LaDue had the secondary assist in his season debut.

Roslovic got the Jets within 2-1 at 4:18 of the third period on a sharp-angle shot into an open net off a pass from Tucker Poolman.

‘Welcome to Canada’: Donations pour in for Syrian boy to play hockey in St. John’s, N.L.

Acciari scores late to give Panthers 5-4 win over Wild