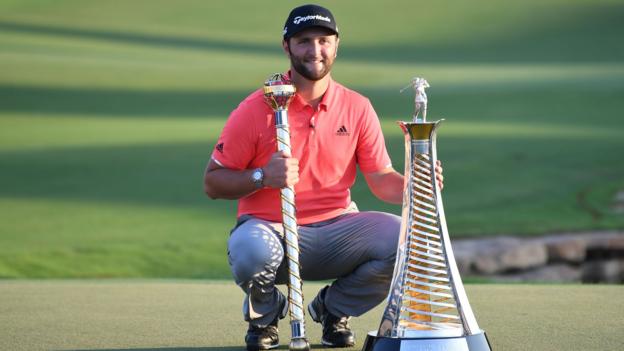 Jon Rahm birdied the final hole to win the DP World Tour Championship in Dubai on 19 under par and clinch the European Tour’s season-long Race to Dubai title.

Rahm holed a three-foot putt to finish one ahead of England’s Tommy Fleetwood and win the event for the second time.

The win also meant the 25-year-old Spaniard also pipped Fleetwood, 28, to be the number one in Europe for 2019.

Rahm becomes the second Spaniard to achieve the feat after the late Seve Ballesteros, who won it six times.

“Seve was such an idol for us,” said Rahm. “To put my name there, it’s hard to believe. I can’t believe some of the things I have accomplished.”

Such drama on the final green seemed unlikely when Rahm began with five birdies in his first seven holes on Sunday to open up a six-shot lead – but he then wobbled, making four bogeys in the next eight.

In contrast, Fleetwood was inspired on the back nine, picking up five birdies in his final seven holes, including at both 17 and 18 to draw level with Rahm at 18 under after a best-of-the-day seven-under 65.

Fleetwood finished on 18 under, meaning Rahm knew he needed a birdie four up the last to take both prizes.

He produced an exquisite up-and-down from a greenside bunker to card a closing 68, seal a one-shot victory and claim the Race to Dubai.

It was his fourth win of 2019 and his second in a row, having won the Open de Espana in his last tournament six weeks ago.

The victory also takes him up to third in the world ranking behind number one Brooks Koepka of the United States and Northern Ireland’s Rory McIlroy, who finished fourth at Jumeirah Golf Estates after a closing 73.

“But how many times do you dream of having to birdie the last to win a tournament?”

Close but no repeat for Fleetwood

Fleetwood began the week in second place in the Race to Dubai standings behind Austrian Bernd Wiesberger but Rahm’s 66 on day three put him in charge, four clear of the Southport player.

But Fleetwood, who won the Nedbank Golf Challenge in South Africa last week, again produced his best golf on Sunday as he took the battle all the way to the end in trying to repeat his Race to Dubai success of 2017.

Joint overnight leader Mike Lorenzo-Vera finished two shots behind Rahm in third after a closing 70, but five clear of McIlroy.

Wiesberger finished in a tie for 28th, leaving him third in the Race to Dubai, while Scotland’s Robert MacIntyre capped an impressive season with a 68 as he won the Rookie of the Year crown.