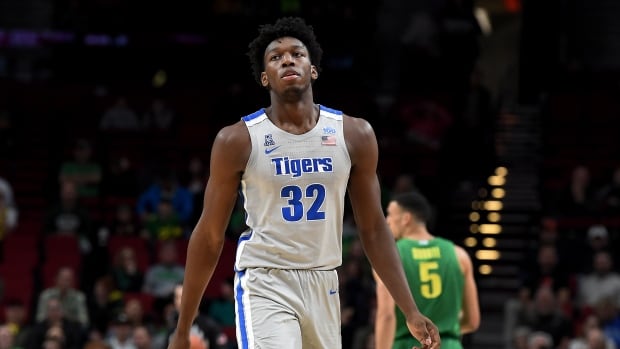 James Wiseman and his advisers have decided a legal battle with the NCAA is not the best way to keep the heralded freshman on the basketball court.

The seven-foot-one centre withdrew his lawsuit and the dramatic turn of events in the much-debated saga means Wiseman now will sit on Memphis’ bench until the NCAA rules otherwise.

Wiseman successfully won the opening round against the NCAA and the university, obtaining a restraining order to continue playing after being ruled likely ineligible for receiving improper benefits from Penny Hardaway. But Thursday morning Wiseman’s attorneys announced he withdrew his lawsuit, saying the legal action was not helping resolve the issue.

“It has become clear to Mr. Wiseman that the lawsuit he filed last week has become an impediment to the University of Memphis in its efforts to reach a fair and equitable resolution with the NCAA concerning his eligibility status. Therefore, Mr. Wiseman advised his legal team that he wished to withdraw his lawsuit,” the law firm of Ballin, Ballin and Fishman posted on Twitter.

Wiseman stepped into the national spotlight — with the support of the University of Memphis — by standing up against the NCAA in the courts.

Now seven days and two games after obtaining the restraining order, Wiseman’s fate is in the hands of the NCAA — like all those before him.

“Keep The Faith, Trust God, Continue on my Path. My Story isn’t Finished,” Wiseman wrote on Twitter on Thursday.

The university declared Wiseman ineligible once he withdrew his lawsuit, though Memphis officials say they hope to get him back on the court soon as possible.

A statement released Thursday by Memphis said, “The university supports the decision, as it believes it is in James’ and the men’s basketball team’s best interests to resolve his eligibility issue expeditiously through the NCAA process.”

Memphis officials say they are immediately applying for Wiseman to be reinstated. Until then, Wiseman will be held out of games but can practice with the No. 13 Tigers (2-1).

‘In the hands of the NCAA’

“The NCAA is fully aware of the unique nature and challenges in this particular case, and the university is confident that the NCAA will render a fair and equitable decision consistent with its mission,” officials said in the statement.

The NCAA first ruled Wiseman eligible in late May, according to his now dropped lawsuit. Then the NCAA sent Memphis a letter saying Wiseman was likely ineligible for receiving what the governing body deemed impermissible benefits from Hardaway, before the former NBA star became Memphis’ coach.

The freshman obtained a temporary restraining order an hour before Memphis played its second game Nov. 8. After the legal action, the Tigers proudly put Wiseman at centre stage in the starting lineup of a rout of Illinois-Chicago. The Tigers then played him in a loss Tuesday night at No. 14 Oregon.

The freshman has played in all of Memphis’ first three games, and the 7-foot-1 centre is the team’s leading scorer, averaging 19.7 points and 10.7 rebounds.

The NCAA made it clear with Wiseman on the court soon after the temporary restraining order was granted that the association had told Memphis the freshman was “likely ineligible.”

“The university chose to play him and ultimately is responsible for ensuring its student-athletes are eligible to play,” the NCAA wrote on Twitter.

Wiseman’s lawsuit stated the NCAA declared the centre eligible in May after months of investigation and that Hardaway disclosed he gave $11,500 in moving expenses to help the player’s family move from Nashville to Memphis in the summer of 2017 — before Wiseman played at East High School as a junior for Hardaway. The university said in a statement that Wiseman didn’t know about the money given to his family.

Hardaway was hired by his alma mater as head coach in March 2018. Wiseman committed to Memphis and Hardaway in November 2018 as the gem in the nation’s No. 1 recruiting class for Hardaway.

Wiseman’s attorneys had said the NCAA sees Wiseman now as ineligible because Hardaway is considered a booster after he made a $1 million donation to the university’s Sports Hall of Fame in 2008. That would make Hardaway’s 2017 gift to the player’s family impermissible under guidelines for boosters.

Now the case is in the hands of the NCAA.