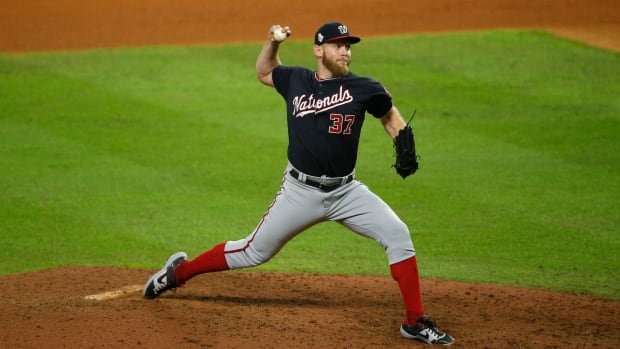 The right-hander has agreed to a record $245 million US, seven-year contract, a person familiar with the negotiations told The Associated Press on Monday.

The person spoke on condition of anonymity at baseball’s annual winter meetings because the agreement had not been announced.

Strasburg’s deal is the highest for a pitcher in total dollars and average annual value at $35 million. The largest contract for a pitcher had been David Price’s $217 million, seven-year deal with Boston that began in 2016. The highest average value had been Zack Greinke’s $34.4 million as part of a $206.5 million, six-year agreement with Arizona prior to the 2016 season.

The 31-year-old Strasburg was drafted first overall by Washington in 2009 and has spent his entire career with the Nationals. He’ll stay in a rotation that also features All-Stars Max Scherzer and Patrick Corbin.

Strasburg’s average annual value is second among all players behind outfielder Mike Trout’s $35.5 million in a $426.5 million, 12-year contract with the Los Angeles Angels that started last season. Strasburg’s deal also sets a floor for free agent pitcher Gerrit Cole, who also is represented by agent Scott Boras and is expected to top the records Strasburg just set.

Baseball Hall of Fame: Derek Jeter says one vote that kept him from being unanimous pick won’t bother him

Curt Schilling falls short in 2020 Hall of Fame vote, but takes another big step toward Cooperstown

Baseball Hall of Fame voting: Omar Vizquel, Scott Rolen and other players who made gains on 2020 ballot

As return to Toronto looms, Kawhi Leonard sitting out against Pacers