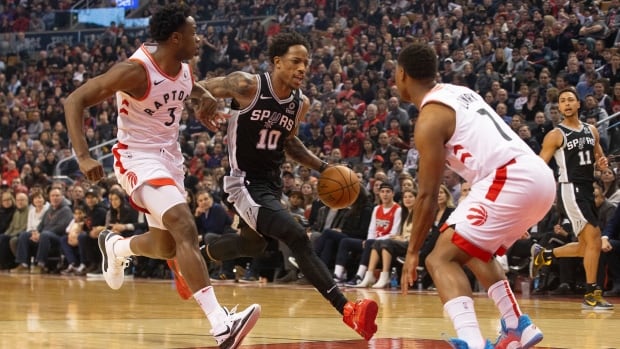 DeMar DeRozan exacted a bit of revenge against his old team on Sunday.

DeRozan scored 22 of his 25 points in the second half to lift San Antonio to a 105-104 victory over the Toronto Raptors, his team for nine seasons before he was traded to the Spurs in the 2018 off-season for Kawhi Leonard.

Serge Ibaka had 21 points and 14 rebounds to top Toronto (25-14), becoming the third Raptor in history to record a double-double in eight straight games, along with Chris Bosh (five times) and Donyell Marshall.

The Spurs win ruined the returns of Pascal Siakam and Norman Powell, both back in the Raptors’ lineup after missing 11 games apiece. Powell, who’d been out with a shoulder injury, finished with 20 points. Siakam, who’d been sidelined with a groin injury, had 15 points and quickly showed the Raptors what they’d been missing when he scored the game’s first basket 47 seconds in when he posted up DeRozan.

The Toronto Raptors held a moment of silence for the victims of Flight PS752, which was shot down in Iran, before the team’s game against the San Antonio Spurs. 0:47

Marc Gasol — who wore a T-shirt that read “There is no planet B” — sat out his 12th consecutive game, while Fred VanVleet was sidelined for his third in a row. Both have hamstring injuries.

The Raptors led for most of the night, and had cobbled together an 18-point advantage by midway through an entertaining third quarter. Kyle Lowry and Derrick White went crashing out of bounds battling for a loose ball at one point. Lowry landed inches from where his young son sat, giving his son a quick kiss before running back onto the court.

The Raptors led 82-69 to start the fourth, but a basket by LaMarcus Aldridge then a pair of DeRozan free throws capped a 21-5 Spurs run that gave San Antonio a three-point lead with 5:31 to play. White scored on a long jumper to put the Spurs up be nine. Lowry, Powell and Ibaka responded with back-to-back-to-back three-pointers to tie the game with 1:17 to play, whipping the Scotiabank Arena crowd into a frenzy.

But Marco Belinelli knocked down an open three with 28 seconds left, Siakam missed an a layup, then DeRozan sprinted downcourt chased by Lowry, who fouled his friend and old teammate. DeRozan’s free throws with 9.3 seconds left clinched the Spurs the victory.

Lowry scored on a catch-and-shoot three with four seconds left, Aldridge missed two free throws, and Siakam’s last-ditch shot at the buzzer was off target.

DeRozan arrived in Toronto playing some of the best basketball of his career — he’d scored 20-plus points in the 10 previous games, becoming the first Spurs player in history to do so.

It was DeRozan’s second game in Toronto since the blockbuster trade that also sent Jakob Poeltl to the Spurs. The Raptors beat San Antonio 120-117 last February in Toronto when Leonard stole the ball from DeRozan and scored on a go-ahead dunk. Leonard drained two free throws in the dying seconds while the Toronto crowd chanted “M-V-P!”

Siakam was clearly happy to be back on the floor, smiling widely when introduced in the Raptors starting lineup. He then went to work, connecting on his first shots for nine points before the game was five minutes old. His three-pointer put the Raptors up by 12 midway through the quarter. Toronto took a 28-21 advantage into the second.